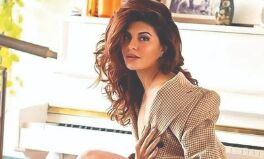 Bollywood actor Jacqueline Fernandez has fallen into big trouble as she did not appear in the ED office for the second time in a row. Reportedly, she was summoned by the agency for interrogation in the money laundering case against Sukesh Chandrasekar and his actor-wife Leena Paul for the second time, but it was a no-show from her side.

According to the news reports, Jacqueline has been summoned for the third time in the ED office.

According to reports of a leading news agency, the probe agency has asked Fernandez to appear at its Delhi office at 11 am on October 16. According to sources, the officials want to confront the actor with the con couple.

Chandrasekar and Paul were already arrested by Delhi Police for allegedly duping the family of 'Fortis Healthcare' promoter Shivinder Singh of around Rs 200 crore.

Jacqueline Fernandez had appeared before the Enforcement Directorate for the first time on August 30, during which she was examined for four hours as a witness in the case and her statement recorded under the provisions of the Prevention of Money Laundering Act. The case was filed after Aditi Singh, wife of Shivinder Singh, said a man posing as a senior Law Ministry official offered to help get bail for Singh (then in jail) in return for money.