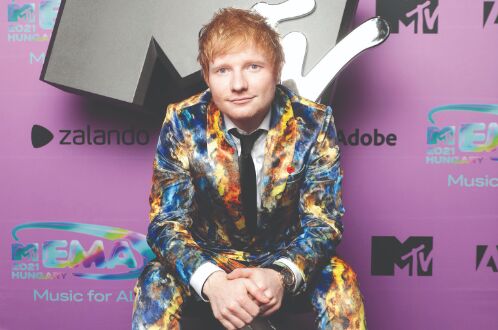 Canadian singer Justin Bieber, who was leading the nominations with eight bids, did not win any awards.

According to 'Variety', the show was hosted by Saweetie, who won the 'Best New Artist' trophy.

During her hosting stint, she interacted with superhit Korean drama series 'Squid Game'-inspired soldiers in hot pink suits and MTV-branded masks. Saweetie also performed a medley of her hits, including 'Best Friend', 'Tap In' and 'OUT OUT'.

Sheeran opened the ceremony with a rendition of his latest single 'Overpass Graffiti' and later performed his hit number 'Shivers'.

Italian rock band and 2021 winners of the 'Eurovision Song Contest' 'Maneskin' were voted as the 'Best Rock Act'.

Lead singer Damiano David said, "We also want to say that people usually told us that we were not going to make it

with our music. Well, I guess you were wrong."

Nicki Minaj scored the 'EMA' in the 'Best Hip-Hop' category, with Olivia Rodrigo clinching the trophy for the best push.

YUNGBLUD, who won the award for the 'Best Alternative', said the win was a 'tribute to individualism'.

"This is an award for the 13-year-old boy from the north of England who was terrified to be who he was. If you are out there and you feel like you cannot be who you are, you can be. Keep fighting. Keep being brilliant," the English musician added.