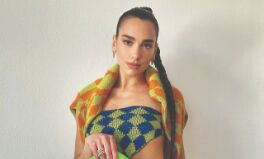 Dua Lipa's song 'Levitating' may have been the most popular song of the past year, but it would not get any recognition at the 'Grammys'.

According to 'Variety', the 26-year-old 'New Rules' singer did not submit the song for Grammys' eligibility. The magazine further reported that the song should be eligible for nomination at the upcoming ceremony because 'the single had its major impact this year and because it was a new remix, with DaBaby as an added featured artist'.

While Dua's negligence to her majorly hot song is unlikely, reports suggested that the singer did not want to submit it for any awards following DaBaby's rant that caused major industry backlash.

'Variety' also noted, "Lipa presumably could only have submitted the DaBaby and that would have been a lot to ask of voters to pretend that the persona-non-grata rapper was not on it. Most likely, Lipa was saving voters having to agonise over choosing between their love for her and their dread of giving the thumbs-up to a guy still considered toxic by much of the industry for his homophobic comments."

Back in July, DaBaby encouraged the audience to put their cellphone flashlights in the air if they 'did not show up today with HIV/AIDS or any of those deadly sexually transmitted diseases that will kill you in two to three weeks'. The singer also made several other derogatory remarks about HIV/AIDS and LGBTQI+ people. The singer was soon called out by the likes of Elton John, Madonna, Miley Cyrus and Dua Lipa herself.