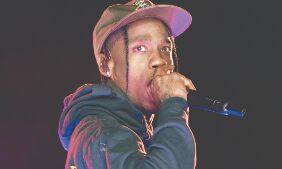 The 'Astroworld Festival' incident that cost the lives of eight concertgoers due to the crowd surge at Travis Scott's performance has left everyone shocked and saddened. While the rapper has maintained that he will be assisting the families of victims and sending out his prayers for those who lost their lives, Scott has now been named in a lawsuit along with Drake after a 21-year-old attendee sued both the musicians over the tragic incident.

As reported by 'AFP', the complainant was one of the severely injured attendees at the festival held on November 5. The tragic incident left eight dead and over 300 injured among a crowd of 50,000 concertgoers at Houston's NRG Park where the crowd started pushing toward the stage when Scott was performing, creating a stampede situation.

'Live Nation Entertainment' has also been named in the lawsuit since the complainant suggested that the security did guards hired by the company at the event did not respond to calls of help. The lawsuit also sued rapper Drake who joined Travis on stage for continuing to perform and 'inciting the crowd'. This is among the first lawsuits to be filed relating to the incident.

A criminal investigation into the tragedy has also been opened by the authorities in Texas, involving both homicide and narcotics detectives, Houston Police Chief Troy Finner told reporters on November 6.

It was also announced on November 7 by attorney Ben Crump, who specialises in civil rights and personal injury and has represented clients including the families of victims of police violence George Floyd and Breonna Taylor that he filed suit against Scott and 'Astroworld' on behalf of a 21-year-old concertgoer Noah Gutierrez.