Dilip Saheb encouraged me to follow my heart: Saira 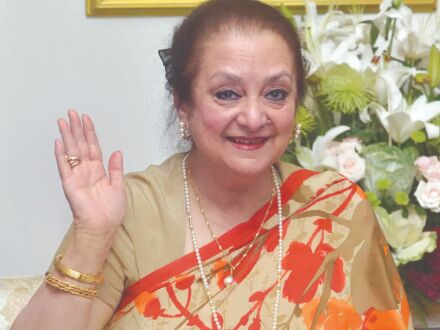 Legendary actor Dilip Kumar, who gained a massive following with his performances in a career spanning over five decades, left for the heavenly abode in July this year. The late actor was recently paid a tribute during the 'International Film Festival of India' (IFFI) in Goa.

Remembering him, Saira Banu recently expressed her heart in a lengthy article and said that he always motivated and encouraged her to follow her heart.

According to a news report, Saira Banu in her article said, "On the personal front, not many know that it was Dilip Saheb who motivated and encouraged me to follow my heart and create a fund for providing medical assistance and daily necessities to genuinely needy people who had no earning capacity. The charity trust WORCS (Welfare Organisation for Care and Relief Services) supports over 50 families living below the poverty line."

Banu also reportedly said that Dilip Kumar was the first actor in Indian cinema who understood that a film was a product created by the collective contribution of varied skills. She selected one film at a time as he felt an actor's contribution did not end with his hard work in front of the camera.

"He was convinced that an actor had a responsibility to ensure the success of the product in the fickle film market. He initiated the trend of involvement in the overall making and packaging and selling of the movie as a product in the Indian and overseas markets," said Banu.

The late actor was laid to rest after getting a full state honour in Mumbai. CM Uddhav Thackeray, Dharmendra, Shah Rukh Khan, Ranbir Kapoor, Anil Kapoor and several others had come to pay their last respects to the legend.