Did our family man develop existential crisis in S2? 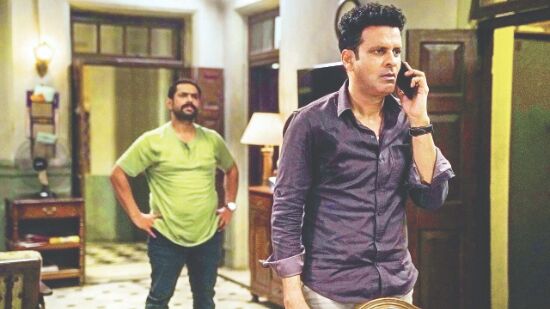 Ever since lockdown started, people have turned to the mercy of OTT streamers to beat the boredom. Film and series makers have also treated it as a golden opportunity to create engaging web series for their dear audience. At the moment, viewers have a treasure chest to entertain themselves with.

Though all kinds of shows are welcomed on OTT, it's the action-spy-thrillers that catch people's attention the most. Whether it's Disney+ Hotstar's 'Special Ops' (Kay Kay Menon and Karan Tacker), Voot's 'Crackdown' (Saqib Saleem and Mohammed Iqbal Khan) or Amazon Prime Series' 'The Family Man' (Manoj Bajpayee and Sharib Hashmi), there is hardly anyone who hasn't binged- watched these doses of thrill and action.

Here, we will talk about one of the aforementioned series - The Family Man (Season one and two) - which broke several records. Season 1 also became the 4th most-watched show in the world.

The Manoj Bajpayee-starrer is about Srikant Tiwari, a typical middle-class family man who tries his best to balance the never-ending familial responsibilities and his duties as a spy in 'Threat Analysis and Surveillance Cell' (TASC).

A very relatable struggle of a middle-class family man strikes the right cord with the audience. It is refreshing to see a husband managing housework along with his 'secret' government job (as till date only stories about wives flitting between homes and career are shown through movies and series).

Season two begins on a note where Srikant leaves TASC and in a bid to give more time to his family, shifts to an IT company. And when our family man thought that he would find some respite in his new job, his 28-year-old boss adds to the already existing problems in his life.

Despite Srikant making efforts for his family, nothing changes much on the home front with his estranged wife and kids being all distant from each other. Even his instructions of not touching their phones while having dinner proved to be an impassable way of bringing everyone closer.

While season one showed Srikant poorly balancing his work and home life, season two sees him in a more miserable state as he gets crushed emotionally and mentally between both worlds. It leaves Srikant to question only one thing – is he doing injustice to his duty towards his

country and family by just denying his true nature? These doubts make me believe that our lead character has developed an existential crisis at that point.

With his unhappiness reaching its boiling point, Srikant joins TASC again on JK's non-stop requests to jump into another life-threatening case. It would be safe to admit that their friendship is similar to that of Sherlock Holmes and Dr Watson!

Season two successfully meets the audience's expectations. An engaging story around sleeper cell of Tamil rebels joining hands with the Pakistani ISI to attack the Indian and Sri Lankan prime ministers keeps the audience glued. However, the family angle in the series does not get justice. One has to figure out what reasons brought Srikant and Suchi's marriage (played by Priyamani) to a standstill. At a few points, it feels like the aspects of his personal life were forcefully weaved in the action-thriller.

The reality of a middle-class man managing his time in and out of his house and struggling to eliminate terrorism from the country seemed fresh in season one, but repetition of the very same old reality is likely to bore people, especially when the series engages in the stereotypical scenarios of Muslim lynching because of their identities.

Season two delivers much more action, subtle humour, punches and heart-stopping scenes like never before in the first few episodes. But after third or fourth episode, the story starts to lose its engagement value only to come back on track towards the climax.

Creators did an excellent job in shooting the climax as well as the police station sequence as it keeps the viewers thoroughly hooked. Bringing on board Tamil actors to play the natives of the place was also an appreciable move by the makers.

To sum it up, 'The Family Man' is one of the best Indian spy thrillers to enjoy due to its adrenaline rush and rib-tickling moments. Undoubtedly there were some flaws in season two as compared to the previous part, but we have a third season to look forward to. Maybe it will compensate for the little disappointment that the viewers have.