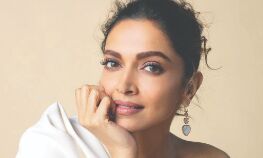 Directed by Sidharth Anand, 'Pathan' marks Shah Rukh Khan's return to the big screen after 2018 release 'Zero'. SRK essay the title role in this action entertainer, which stars John Abraham as the antagonist. Salman Khan has already shot for an entertaining cameo in 'Pathan', he will reportedly essay the iconic spy Tiger in 'Pathan'. Deepika Padukone has already wrapped up one schedule of 'Pathan' and ore action awaits for the Bollywood beauty.

Along with 'Pathan', DP is simultaneously wrapped one schedule of Shakun Batra's next untitled venture. This entertainer also features Siddhant Chaturvedi and Ananya Panday in lead roles.

Deepika Padukone recently kickstarted the shoot of Nag Ashwin's next with Prabhas and Amitabh Bachchan. Titled Project K, the film went on floors on July 24 and Deepika Padukone had shared a photo of Prabhas giving the first clap for the movie. Apart from this, Deepika will also be seen in 'The Intern remake', 'Mahabharata' and '83.