DD will become the most watched channel in 4 years: Anurag Thakur 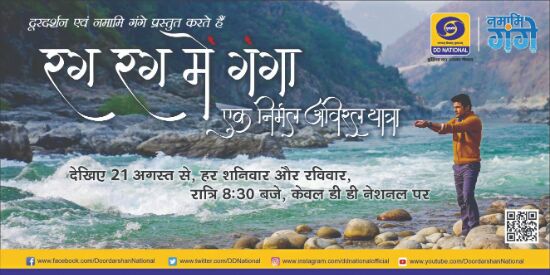 Speaking on the occasion the minister remarked that launch of second season is in itself a parameter of success of the first season which was watched by 1.75 crore viewers. The minister congratulated the team behind the programme and said the expectations from the second season are higher and that this is not just a programme but an effort from Jan Bhagidari to Jan Andolan.

Inviting people to contribute to Ganga rejuvenation, he said that Ganga has an emotional connect with all Indians, and while it has a spiritual relation with Indians it also has a great economic importance. He used the platform to highlight the impact of global warming and appealed that children should be made participants in the efforts to combat climate challenges of today.

The minister further stated that in the next three to four years Doordarshan will become the most watched channel. He added that the channel will create the right content for the platform to bring viewers to Doordarshan.

Season 2 of 'Rag Rag Mein Ganga' travelogue will cover the cultural, mythological, historical and socio- economic details of this great river while being centric to the theme of nirmalta and aviralta. The travelogue will also establish the work being done by NMCG to save the majestic Ganga.

The travelogue, consisting of 26 episodes is being anchored by a well-known actor Rajeev Khandelwal and will go on air from August 21, 2021 every Saturday and Sunday at 8:30 pm on DD National.

Addressing the audience Union Minister Gajendra Singh Shekhawat said that the government has been able to seat Ganga among top ten cleanest rivers of such length in a short span of three years. He added that the programmes initiated by government have all achieved their goals ahead of time and that has been a result of PM Modi's mantra of 4 Ps – Political will, Public Spending, Partnership with stakeholders and peoples' Participation.

Prahalad Singh Patel, addressing the occasion, said that Season 2 of 'Rag Rag Mein Ganga' will be dedicated to Arth-Ganga, the river that laid foundation to expansion of our civilization. He invited people to resolve to contribute to the efforts to redeem ourselves for the omissions of the past towards Ganga, during this period of Amrit Mahotsav.