'Criticism of her fee is a sign of ingrained sexism' 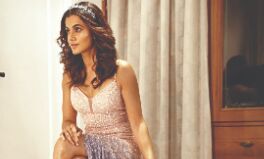 Bollywood actor Taapsee Pannu came out in support of 'Heroine' star Kareena Kapoor Khan, who was recently attacked by people on social media for hiking her fee to essay the mythological character of Sita in an upcoming film.

Earlier, reports had started doing the rounds on the Internet that Kareena Kapoor had hiked her remuneration from Rs 6-8 crore to Rs 12 crore for the mythological film. The film was a retelling of the Ramayana from Sita's perspective.

Sharing her opinion, Taapsee said, "Criticism of Kareena's fee is a sign of ingrained sexism. If the same was done by a man, then people would have said, 'Iski market value badh gayi hai'. Just because a woman is asking for it, she is called difficult and too demanding."

"You will always read about this problem and the issue of hiked salary with women. Why not? Kareena is one of the biggest female superstars we have in the country and if she commands a certain salary for her time, then it is her job. Other mythological characters that are played by men do not do it for free," she added.

On the work front, Taapsee Pannu has some very interesting films in her kitty which include 'Haseen Dillruba', 'Rashmi Rocket', 'Woh Ladki Hai Kahan', 'Shabhash Mithu' and others.