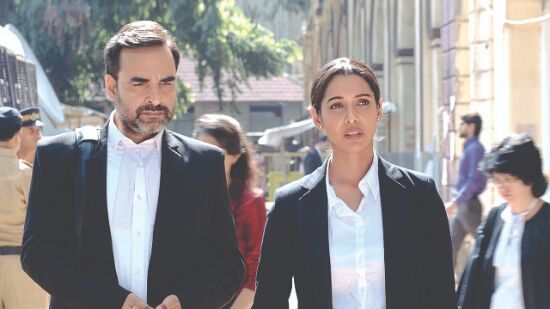 Produced by Applause Entertainment in association with BBC Studios India, the third season will focus on the Indian juvenile judicial and jail system.

The second chapter of the series won Best Asian Drama' at the Content Asia Awards 2021.

"I am excited for the return of everyone's favourite lawyer, Madhav Mishra, in Hotstar Specials Criminal Justice. It is a character that is very dear to me, simply because there's a lot to learn from this role. There are shades to his personality that I appreciate, and his knowledge and wit are aspects of the character I aspire to imbibe in real life. In the third installment, the audiences will see more of his character," Tripathi said in a statement.

"Criminal Justice Season 3" is an Indian adaptation of the successful BBC Studios drama format of the same title.

At Disney+ Hotstar we are committed to bringing powerful and category-defining stories to our viewers. Criminal Justice has been one of the most-watched Hotstar Specials series on Disney+ Hotstar and we are thrilled to bring yet another exciting chapter to our viewers," said Gaurav Banerjee, President & Head - Content, Disney+Hotstar & HSM Entertainment Network, Star & Disney India.

Sameer Nair, CEO of Applause Entertainment, said the third season will tackle a subject that has not been explored before: the legal process for juveniles.

"We take a look at the legal process for juveniles in India within a storyline that explores the stresses of modern urban relationships," he added.

Written by Peter Moffat, the original UK version of "Criminal Justice" is an award-winning British television drama that follows an individual on a suspense-filled journey through the criminal justice system.

Also adapted in the US as "The Night Of", starring John Turturro and Riz Ahmed who won an Emmy for his performance, the series has won multiple TV awards including the BAFTA, the RTS and the International Emmys.

"Embarking on the production for season three demonstrates the immense potential of the Criminal Justice franchise to transcend geographical boundaries and touch the hearts of local Indian audiences," Gogate said.