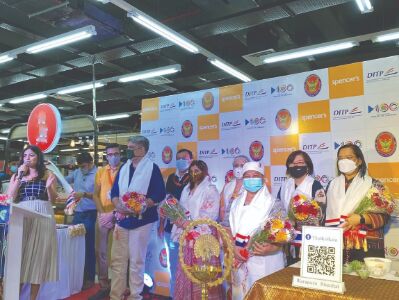 Consul-General pointed out the Fish cakes recipe shown in the launch's cooking demonstration using all ingredients that can be purchased from Spencer's. The fish cake's 2 key ingredients are Bekhti fish fillets from West Bengal and red curry paste from Thailand.

The demonstration was led by Waraporn Khenbai, Consul-General's cook, who has been working as a Thai food cook for Thai dignitaries for many years and was recently featured in the show 'Aahaarn-Aahaar' on The Consulate's Facebook page and YouTube channel 'ThaiKolkata'.

Following the opening speeches by Spencer's executives, Director of Thai Trade Centre, and Consul General, a local Thai dancer performed a Tarikipas Dance, which is a shared culture among the Southern part of Thailand, Malaysia, and South Sulawesi of Indonesia.