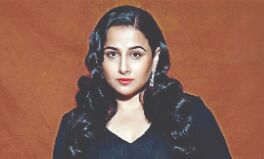 Bollywood actor Vidya Balan, who is known for her passion to portray inspiring roles recently got candid at a virtual press conference for a virtual film fest about how she prefers acting to directing and how roles have evolved for women in today's time.

The 'Sherni' star had turned producer for her short film, in which she also plays the protagonist. When asked if taking up direction is something that is on her mind, she replied "Neither I have the ability nor do I have the desire to direct. I enjoy what I do as an actor and I do not want anything else to take that joy away from me."

The 'Parineeta' star, who has been at the forefront of many women-centric films, said that while there is a shift in the way women's stories are told and represented onscreen, the phenomenon is still new.

"When I did 'Ishqiya' in 2008, people told me 'Why would you do a film like this?' 'It has got a slightly artsy vibe', 'You have been cast opposite Naseeruddin Shah who is much older than you' or 'Your career will be shortened'. For me, it has always been the subject of the film," revealed Vidya.

She further said, "I wanted to do it because I loved it. If it meant my career will be short, so be it. The film did well and slowly things started opening up for me. Year after year, the scope of subjects that I get offered has expanded. Cinema has now started to look at women as people and human beings now. The films that are being made now are not just about women issues, but also focuses on the way women are being represented, which is refreshing and liberating."

"A lot of times, even as a woman, who calls herself a feminist - although I do not believe in tags and because it explains what I'm trying to convey better - I realise that my mindset is patriarchal, which is a result of strong and deep-rooted conditioning. We often

do not realise it," said the actor.