'Chintuji's role was tailor-made for him' 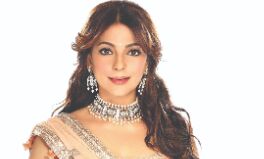 Bollywood actor Juhi Chawla will be seen in the upcoming film 'Sharmaji Namkeen'. This film also stars late actor Rishi Kapoor, who passed away on April 30, 2020, after fighting a long battle with cancer. While Kapoor had shot for a significant part of the film, later, veteran actor Paresh Rawal stepped into his role and shot the film alongside Juhi.

In a recent interview with a leading daily, Juhi revealed that the film is gearing up for a release on Rishi Kapoor's 69th birth anniversary, on September 4.

"We are looking forward to its release on Chintuji's birthday, September 4 this year," said Chawla,

She added, "After Rishi Kapoor's death, the film's producers - Farhan Akhtar, Ritesh Sidhwani and Honey Trehan - made sure that it was completed on time."

She further shared some insight about her thoughts on the script and Chintuji's role in the film.

"It is one of the sweetest, warmest and funniest scripts I have heard in some time. When it was first narrated to me, I was excited! The dialogues and moments of the entire film keep you smiling and chuckling with laughter and Chintuji's role was tailor-made for him," shared the actor. She added that she could almost see him in the scenes and hear him say the lines.

Juhi also said that they had begun shooting for the film in January 2020 in Delhi. She stated that they had taken a break at the end of the month and unbeknownst to anyone, Rishi Kapoor's health conditions deteriorated in the coming months before he passed away in April.

'Sharmaji Namkeen' is helmed by debutante director Hitesh Bhatia. Before this, Juhi and Rishi Kapoor were seen together in films like 'Bol Radha Bol', 'Luck By Chance' and 'Eena Meena Deeka'.