Casting Robert as Iron Man was the biggest risk: Kevin 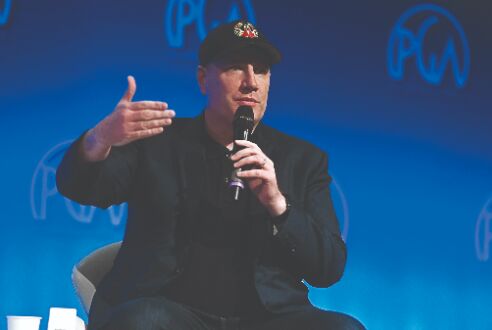 For contrary to the belief that 'MCU' movies run on an established formula, the writers and directors have taken several creative risks over its 13-year history.

While speaking to 'Cinemablend', Feige said, "I was lucky enough to be involved in early 'Spider-Man' films and 'X-Men' films. But we wanted to do an 'Iron Man' movie.

I still think about the biggest risk - which seems outrageous to say now - was casting Robert Downey Jr. It was both the biggest risk and the most important thing in the founding of the 'Marvel Cinematic Universe'. Without Robert, we would not be sitting here today. I believe that."

It is easy to forget now when Downey Jr is one of the biggest actors in the world that he was not popular at the time. Not because of his lack of talent, but rather because of his history with drugs and alcohol.

Director of the first two 'Iron Man' movies Jon Favreau revealed in a 'Rolling Stone' interview that 'Marvel' flat out refused to hire Robert Downey Jr. Marvel's response was that 'under no circumstances are we prepared to hire him for any price'. He had even called Robert Downey Jr and said this is unlikely to happen.

"I fought, I tried and I did what I could and it is a pity and a shame, but unfortunately, it was going to stop here," Favreau told the actor. Downey, however, had persisted, "With your permission, I'm going to hold out hope."

In an interview with '100.3 Jack FM', Favreau had called Downey Jr the best actor for the role.