'Call My Agent: Bollywood' to release on October 29 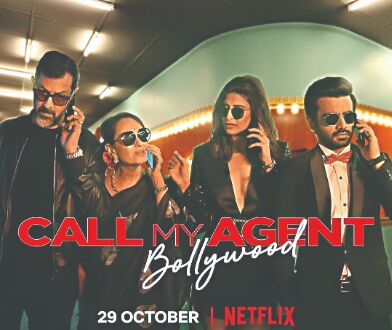 Call My Agent: Bollywood', the Indian adaptation of the popular French series, will premiere on 'Netflix' on October 29, the streaming platform recently announced.

Produced by 'Applause Entertainment' in association with 'Banijay Asia', the project was announced in October 2020. The original workplace comedy, which was titled 'Dix Pour Cent' in French, was created by Fanny Herrero and show-run by Cedric Klapisch.

'Netflix' released the first trailer of the series and it gives a hilarious and refreshing glimpse into the glamorous world of Bollywood, the ups, the downs and everything that goes into building the stars of today.

'Call My Agent: Bollywood' is written by Abbas and Hussein Dalal and directed by Shaad Ali of 'Saathiya' and 'Bunty Aur Babli' fame.

The show will feature special appearances by an array of Bollywood personalities, including Farah Khan, Ali Fazal, Richa Chadha, Lara Dutta, Jackie Shroff and Dia Mirza. Ali said the Indian adaptation of 'Call My Agent' is a project which is 'close to my heart'.

"It was a huge responsibility to be mindful of the original screenplay that has been such a success and yet has my stamp on the adaptation. Each component of this show has been thought through with intricacy - right from the casting to the cameos," said the director.

He added, "Each of us, included in this project, have poured their heart and soul into it and I cannot wait to show the audiences the satirical world of showbiz through my lens. Rajat, Ayush, Aahana and Soni share such brilliant chemistry that shooting with them has been a riot."

Original series 'Dix Pour Cent', a reference to the 10 percent talent agents make from their clients' deals, has already been adapted for audiences in Turkey and the UK.