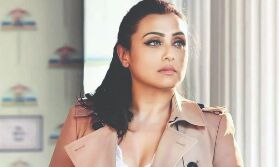 Rani Mukerji believes that her upcoming feature 'Bunty Aur Babli 2' is a quintessential family entertainer, a genre that has been overlooked by the Hindi film industry in the past few years.

The movie is a sequel to the 2005 Shaad Ali-directed blockbuster, which featured Mukerji and actor Abhishek Bachchan as the titular characters of con artists.

Mukerji said the film, produced by 'Yash Raj Films' (YRF), completely fits into the bracket of a 'genuinely good and clean comedy' made for the masses.

"We rarely make family entertainers today and 'Bunty Aur Babli 2' is a true-blue comedy that you can take your entire family to and enjoy laughing your hearts out with them. It is a quintessential Hindi film that everyone has missed for some time now and I'm confident that it will entertain audiences worldwide," she said.

Mukerji, 43, said the strength of 'Bunty Aur Babli 2' is in its humour and universal appeal, which is a rarity in the kind of films being made today.

In the film, Mukerji and Khan are pitted against the new con couple, played by 'Gully Boy' breakout Siddhant Chaturvedi and debutante Sharvari.

"It is a genuinely good, clean comedy that is also hard to come by and I had a blast working in this film. 'Bunty Aur Babli 2' is meant for all audiences, across all age groups and that is a rarity because the industry is not making such universal films these days. I hope our film makes people happy and they have an amazing time as they return to the cinemas," she added.