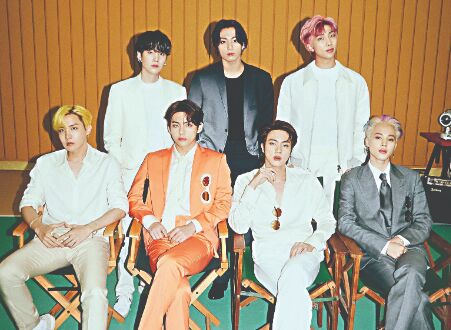 According to a series of tweets posted on the verified 'Twitter' account of the Office of the President, the Republic of Korea, the septet will also attend the 76th UN General Assembly in September as part of their duties.

The band, comprising RM, Jin, Suga, J-Hope, Jimin, V and Jungkook will lead 'the global agenda for future generations, including sustainable growth and expanding diplomatic power in line with Korea's elevated status in the international community'.

" 'BTS' will attend major international conferences such as the 76th UN General Assembly in September to deliver messages of comfort and hope to young people around the world as a 'special envoy for future generations and culture'. We also plan to carry out various activities to promote international cooperation to solve global issues such as environment, poverty, inequality improvement and respect for diversity," the tweet read.

'BTS', whose full name is 'Bangtan Sonyeondan' (meaning 'Bulletproof Boy Scouts') or 'Beyond The Scene', is one of the most popular all-male groups in the world courtesy hit songs, like 'Boy in Luv', 'ON', 'Dope', 'Black Swan' and their Grammy-nominated 'Dynamite', which was their first full-fledged English track.

BTS' participation at this year's UN General Assembly will be their third, following an in-person appearance in 2018 and their second, a pre-recorded video message in 2020 owing to the novel Coronavirus pandemic.

The group, whose music underscores the themes of identity, self-growth, healing and togetherness, has been in constant touch with their fans, collectively called 'ARMY', during the pandemic through several online concerts and interactions on social media.