'Beyond proud of the work that I did with Disney' 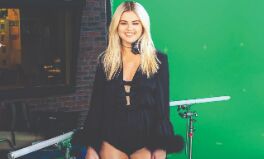 Selena Gomez, who is currently promoting her upcoming show 'Only Murders in the Building', spoke about her 'Disney' past during one of the interactions where she commented about 'signing away' her life to them and not knowing what she was doing as a young actor.

After her comments that she jokingly cracked caused a stir, the singer once again clarified her point in a recent interview.

While talking to 'RadioTimes', Gomez stated that she is 'beyond proud' of the work she has done in the past and while adding on if she had any reluctance to star in TV series again, she said, "No, definitely not. I was looking for another show to do. By the way, I'm beyond proud of the work that I did with 'Disney' as well. It kind of shaped who I am in a way."

Gomez's comments about her work with 'Disney' were further defended by her co-star Steve Martin, who added that when Selena spoke about 'signing away' her life to 'Disney' at the 'Television Critics Association' press panel, she said it in the most 'light-hearted' way.

In the same interaction, Selena further added that she felt lucky she was taken care of and had a positive experience while working at the age of 15 on the 'Disney' show and also mentioned she is grateful for it.

As for Gomez's upcoming show, 'Only Murders in the Building' stars her alongside Steve Martin and Martin Short. The series revolves around three strangers who share a penchant for true crime and then come together to solve a case when a crime takes place in their apartment building.