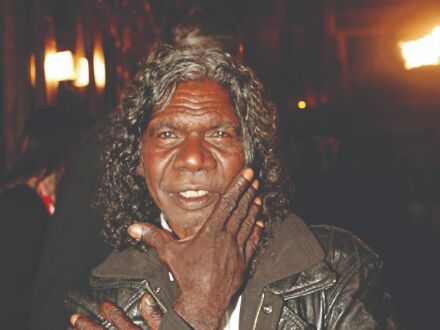 Australia's most acclaimed Indigenous actor and dancer, David Gulpilil, has died of lung cancer, a government leader said recently. He was 68 years old.

Gulpilil found his widest audiences with his roles in the 1986 hit film 'Crocodile Dundee' and in director Baz Luhrmann's 2008 epic 'Australia' in a career that spanned five decades. He was often described as a bridge between Indigenous Australia and the outside world who never fit comfortably in either place.

"It is with deep sadness that I share with the people of South Australia the passing of an iconic, once-in-a-generation artist who shaped the history of Australian film and Aboriginal representation on screen," said South Australia state Premier Steven Marshall.

An accomplished didgeridoo player, David Gulpilil mixed with Jimi Hendrix and Bob Marley. He was feted in New York and Paris. He also spent periods of his life as itinerant drinking and sleeping in parks in the northern Australian city of Darwin and stints in prison for alcohol-fueled offenses.

Gulpilil was born on tribal land in the sparsely populated wilds of the Australian northern frontier in the early 1950s, his friend and caregiver Mary Hood said. His date of birth was recorded as July 1, 1953, a guesswork date set by local missionaries.

First contacts between Indigenous Australians and the outside world were becoming rare but continued in the remote Outback for another 30 years from the time of Gulpilil's birth. Family groups followed in nomadic traditions unaware their land had been colonised by Britain two centuries earlier.

Gulpilil said he never saw a European Australian until he was eight years old and considered English his sixth language, his biographer Derek Rielly wrote. The other 13 were Indigenous dialects. Gulpilil's Christian name was foisted upon him at school.

David was a 16-year-old ceremonial dancer performing in the Indigenous mission of Maningrida in 1969 when he met British director Nicolas Roeg, who was scouting for filming locations. Gulpilil starred in Roeg's acclaimed 1971 movie 'Walkabout' as a lone youth wandering the Outback as part of a tribal rite of passage, who comes across and rescues two lost British children. The British siblings were played by a teenage Jenny Agutter, who later found fame in Hollywood and the director's seven-year-old son, Lucien.

His final role was the remake of 'Storm Boy' in 2019, in which he played the father of the central character in the original, Fingerbone Bill.