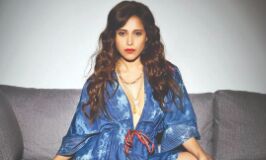 Nushrratt Bharuccha has garnered a lot of attention owing to her new release 'Chhorii'. The new film is a remake of the Marathi film 'Lapachhapi' and features Nushrratt in the lead role, alongside Mita Vashisht, Rajesh Jais, Saurabh Goyal and Yaanea Bharadwaj.

In a recent interview with a leading daily, Nushrratt opened up on being the 'hero' of the film and said that the change has come from the audience as they are getting interested in watching women play the central roles.

Speaking to a leading news agency in an interview, Nushrratt said, "Honestly, I had not imagined or processed it because I do not think that way. When I watched the trailer, I was like, 'Oh that is me, me again. Oh my God, I am back.' Earlier, I would count the number of times I get seen in a trailer. It is surreal and small joys in life and it is possible only because times have changed. And more than the industry, the change has come by the audience as they want to see stories with women in the central parts. Since the demand is there, one has to supply. Now, people are seeing that change in their own houses where the woman can be the breadwinner. Now, with sons and daughters being treated equally, we are seeing women lead steadfast lives and make their own choices. It doesn't seem unreal and thus they accept the same in cinemas too."

The movie is directed by Vishal Furia and produced by Bhushan Kumar, Krishnan Kumar, Vikram Malhotra, Jack Davis and Shikhaa Sharma. The much-awaited movie hit the OTT platform on November 26.