Aryan and two others denied bail in cruise case 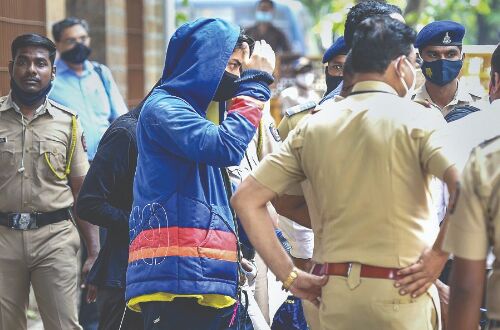 A metropolitan magistrate's court here on Friday rejected bail applications of Aryan Khan, the son of Bollywood actor Shah Rukh Khan, and two others in a case pertaining to an alleged seizure of narcotic drugs from a cruise ship off the Mumbai coast.

The trio, alongwith some others, were arrested by the Narcotics Control Bureau on Sunday following a raid on a Goa-bound cruise ship. On Thursday, the court had rejected the NCB's request for further custody of Aryan and seven others and instead sent them in 14-day judicial custody.

During the hearing, Additional Solicitor General (ASG) Anil Singh, appearing for the NCB, opposed the bail pleas, arguing that a magistrate has no jurisdiction to hear these applications.

In cases under the Narcotic Drugs and Psychotropic Substances (NDPS) Act, all matters should be heard by a special court, he said, citing several previous rulings.

Singh also argued that it could not be a coincidence that all the accused were found at the same place, and alleged that they were regular consumers of drugs.

If released on bail, Khan might tamper with evidence as he is from an influential family, the ASG said.

WhatsApp chats between Aryan Khan and co-accused Anchit Kumar were not about "football" but referred to "bulk quantities", Singh claimed.

Khan's lawyer Satish Maneshinde had claimed earlier that the chats were about football.

Advocate Maneshinde argued on Friday that the magistrate's court has inherent power to decide bail applications and its role was not restricted to only remanding accused in custody.

To be kept in jail can be humiliating for the accused who enjoys a certain social status, the lawyer said, claiming that the NCB had not found any material against Khan to prove any conspiracy. "Merely because I'm a person from affluent family, it cannot be said that I will tamper with evidence," Maneshinde further argued.

Advocate Taraq Sayed, representing Arbaaz Merchant, contended that the NCB had allegedly recovered only 6 gm of charas from him, and he was not connected with any of the other accused.

"As per the panchanama (crime spot report), Merchant says he was going to consume the charas and have a blast. So only consumption....What is the punishment? Maximum six months. The NDPS Act provides for amnesty clause too," the lawyer said.

The court, after hearing the submissions, rejected the bail pleas saying only that they were not maintainable. A detailed order was expected later.