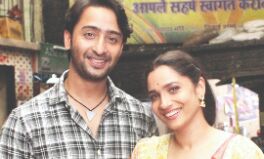 The 2009 show, which was backed by Ekta Kapoor, became a sensation and made late actor Sushant Singh Rajput and Lokhande household names.

The 'Zee TV' show found immense popularity for its romance and the pairing of Singh and Lokhande, who played Manav and Archana respectively. It ran for five years and clocked 1424 episodes.

The official 'Instagram' handle of 'ALTBalaji' posted a picture of Lokhande and Sheikh from the show's shoot.

Season two of the show is titled 'Pavitra Rishta: It is never too late'.

While Lokhande will continue to essay the role of Archana, Sheikh came on board to portray the character of Manav.

Actor-turned-producer Bhairavi Raichura's '24 Frames Production' will helm the digital series, which will be exclusively available on 'Zee5' for 55 days, following which it will be available on 'ALTBalaji'.

The series will be directed by Nandita Mehra and written by Nikita Dhond, Gautam Hegde and Ritu Bhatia.

While actor Usha Nadkarni will be returning as Savita Deshmukh (Manav's mother), other cast members are yet to be announced.