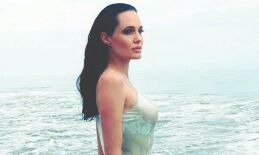 Goudoubo (Burkina Faso): Hollywood actor Angelina Jolie recently visited war-weakened Burkina Faso to show solidarity with people who continue to welcome the displaced, despite grappling with their insecurity and said that the world is not doing enough to help.

"The humanitarian crisis in the Sahel seems to me to be neglected. It is treated as being of little geopolitical importance. There is a bias in the way we think about which countries and which people matter," she said.

While Burkina Faso has been battling a five-year Islamic insurgency linked to al-Qaida and the Islamic State that has killed thousands and displaced more than one million people, it is also hosting more than 22,000 refugees, the majority Malian.

As Special Envoy to the 'United Nations High Commissioner for Refugees', Jolie marked 'World Refugee Day' on June 20 in Burkina Faso's Goudoubo refugee camp in the Sahel, where she finished a two-day visit. She spoke with the camp's Malian refugees and internally displaced people in the nation's hard-hit Center-North and Sahel regions.

After 20 years of work with the UN refugee agency, Jolie revealed that the increasing displacement meant the world was on a terrifying trajectory towards instability and that governments had to do something about the conflicts driving the vast numbers of refugees.

"Compared to when I began working with UNHCR twenty years ago, it seems like governments have largely given up on diplomacy. The countries, which have the least, are doing the most to support the refugees," she said.