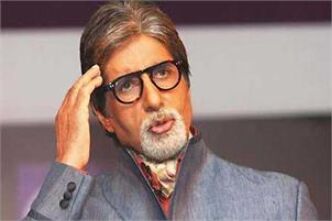 Mumbai: A head constable with the Mumbai police department, who had been posted as megastar Amitabh Bachchan's bodyguard since 2015, was transferred amid reports of him allegedly earning Rs 1.5 crore annually, an official said on Friday.

The head constable, Jitendra Shinde, has been moved to D B Marg Police Station in South Mumbai as part of a routine transfer, the official said.

He was transferred 15 days ago and it was officially published in a police notice at that time, he said.

Bachchan has been provided 'X' category security by the Mumbai police. Shinde became a part of that security cover after he was given the responsibility of being the actor's bodyguard in 2015, the official added.

As per the guidelines, a police constable cannot continue on the same post beyond five years, the he said.

A media report published recently claimed that Shinde earned Rs 1.5 crore annual income while being posted as the superstar's bodyguard.

Sources in the police department said that Shinde is one of the trusted bodyguards and could be spotted with Bachchan as part of his security cover.

The sources added that the state government was also verifying whether Shinde had provided the details of his assets to the police department.