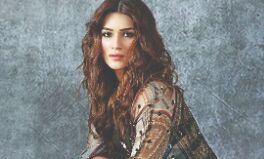 The first look of Bollywood actor Kriti Sanon's family entertainer 'Mimi' recently hit the Internet. The poster shows her with a pregnancy bump and the tagline reads, "Nothing like what you are expecting!"

Sanon shared the first look poster with a caption that read, "This July, expect the extraordinary from the ordinary! Stay tuned."

The movie's main plotline is reportedly centered on surrogacy.

Earlier, while speaking with a leading news organisation, Kriti Sanon clarified that 'Mimi' is not going to be a 'serious' or a 'preachy' movie on the subject.

"It is not preachy or serious. It is not like you are going to watch a film on surrogacy and it is going to be a documentary film. It is a very entertaining film, filled with humour and a lot of ups and downs. There is a beautiful graph of the woman I am playing – Mimi - where she wants to be an actress."

Besides 'Mimi', Kriti Sanon has 'Bachchan Pandey' with Akshay Kumar, 'Bhediya' with Varun Dhawan and 'Adipurush' with South star Prabhas in her kitty.