A love story that stood the test of time 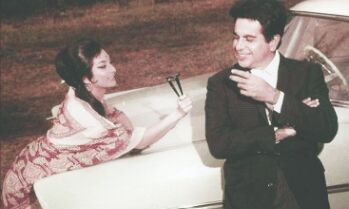 A young-beautiful girl falls in love with a guy who is 22 years elder to her. They get married and live happily ever after.

This may sound like the script of a romantic Yash Chopra movie but is, in fact, real life story of legendary actor Dilip Kumar and the very talented Saira Banu. 12-year-old Saira fell in love with 34-year-old Dilip, who back then was at the top of his career. Banu's love for him was so true, that she always knew in her heart that she was 'going to be his wife'. "I was not just another girl smitten by Dilip Kumar. For me, it was no castle in the air because I had given my dream the strong foundation of faith -faith in myself and faith in God," said Saira during an interview earlier.

It is said that at the premiere of 'Mughal-e-Azam' in 1960, Saira waited to get a glimpse of his crush, but when the actor didn't arrive, she was left heartbroken.

Later, Saira made her debut as an actress and was very well received by the industry as well the audience. Good offers started flooding in but Saira's list had Dilip Kumar's name at the top. The interesting part was Kumar declined working with Saira due to her young age until he met her personally for the first time.

In his memoir titled 'Dilip Kumar: The Substance and the Shadow', the actor elaborately wrote about the first time he met Banu. "When I alighted from my car and entered the beautiful garden that leads to the house, I can still recall my eyes falling on Saira standing in the foyer of her new house looking breathtakingly beautiful in a brocade sari. I was taken aback because she was no longer the young girl I consciously avoided working with because I thought she would look too young to be my heroine. She had indeed grown to full womanhood and was, in reality, more beautiful than I thought she was. I simply stepped forward and shook her hand and for us, time stood still," read his memoir.

Thereafter, love blossomed between the two actors and they tied knot in 1966.

But there is no such thing as a perfect love story. There are always some complications that the couple needs to overcome together. In Dilip Kumar-Saira Banu's story there were problems as well. Saira went through a miscarriage, because of which she could not conceive any child in the future. This brought a hiccup in their married life, leading Dilip to have a controversial love affair with Asma.

Dilip mentioned about it in his memoir in the following words: "The one episode in my life that I would like to forget and which we, Saira and I, have indeed pushed into eternal oblivion is a grave mistake I made under pressure of getting involved with a lady named Asma Rehman whom I had met at a cricket match in Hyderabad (Andhra Pradesh) where she then lived with her husband. She was a mother of three when she was introduced to me as a fan and she seemed like umpteen other admirers, who were introduced to me by my sisters, Fauzia and Saeeda, at public places," he mentioned in his memoir. After his divorce from Asma, he came back to Saira.

That's not it! Before marrying Saira, Dilip Kumar had his share of love affairs.

The legendary actor had admitted being infatuated with actor Kamini Kaushal, who was already married to his brother-in-law. The relationship however ended due to family and societal pressure.

Later, during the filming of 1951 film 'Tarana', Kumar fell for his co-star Madhubala and decided to marry her. But luck was not in their favour as Madhubala's father disapproved of their relationship, leaving the two heartbroken. Their relationship ended on a poor note when BR Chopra sued Madhubala for breach of contract and Dilip testified against her.

What the actor did not know then was how destiny would later bring him to Saira Banu.

For more than four decades, Dilip-Saira's marriage withstood all ups and downs and the reason was their undying love, which is an inspiration for a generation that does not believe in 'forevers'.