Film ‘Mass’ has a simple setup: Four adults gather in a non-descript meeting room six years after a shooting at a high school 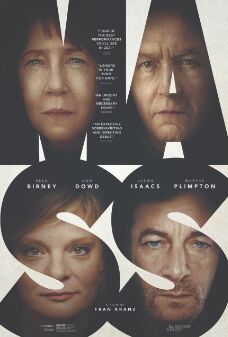 Jason Isaacs was at a Starbucks when he sat down to read the script for 'Mass' for the first time.

It was a decision he'd come to regret if only because at some point he started heaving with sobs and couldn't stop. Strangers in the shop looked at him like they were debating whether to call a professional in to help.

But he was too wrapped up in the story to really take notice. When he came to the end, he put the script down and took a breath.

I felt like I'd been through something enormous, Isaacs said. I remember thinking this is insane. But it's also the reason I became an actor.

'Mass', which is now playing in theaters, has a simple set up: Four adults gather in a non-descript meeting room at a church six years after a shooting at a high school. One set of parents had a son who was killed.

The others are the parents of the perpetrator. And for almost 100 minutes, they talk.

The Starbucks breakdown was just the beginning of what would prove to be a life-changing experience for Isaacs and his co-stars Martha Plimpton, Ann Dowd and Reed Birney.

The resulting film is no less significant: It is one of the most wrenching of the year. And it comes from a first-time writer and director, actor Fran Kranz.

Kranz wrote the script after the Parkland High School shooting. He was a new father at the time and trying to make sense of things trauma, violence, grief, tragedy, forgiveness and reading about the South African Truth and Reconciliation Commission before putting words to the page.

And it will come as no surprise that it started as a play, before Kranz and his producer realized they'd have a better shot at getting it made as a movie.

Kranz had written the difficult part of the emotionally guarded father of the shooter with only one actor in mind: Tony-winner Reed Birney.

I've had people say I'm making a movie and I want you to be in it' my whole life long and it's never once happened," Birney said.

"So it was amazing that like two months later he called and said we're going to make it in November.' Dowd agreed to play the mother of the shooter, Linda, but it wasn't without hesitation. And Isaacs and Plimpton would sign on to play Jay and Gail, the parents of one of the victims.

The only two who sort of knew each other were Plimpton and Birney. Otherwise, they were coming in as strangers and they'd only have two days of rehearsals before filming.

What happened in that room was coming to a level of trust among the four of us and that was extraordinary and fast, Dowd said. Actors have a gift of trusting intimacy quickly.

They could tell right away that they were on the same page.

We all worked the same way, Birney said. None of us was nutty like you've got to call me by my character name off camera' or I need a minute to prepare.' We were all laughing our heads off before the cameras were rolling and as soon as action was called we were sobbing.

Kranz made the decision to film the beginning and the end first, which happen outside of the room. And then for two weeks they went in the room where the conversation was filmed chronologically.

"It's like we all got on the train and we didn't get off until it was time to get off, Plimpton said. The film sort of has that feeling about it too. It's got this kind of momentum that feels very cinematic to me. And it just kind of picks you up and it just takes you where you need to go."

'Mass' was a very stripped-down production. There were no dressing rooms or trailers, just a green room where they would all convene. Each day they would start at 9 a.m. and go until 5 p.m. since they were dependent on natural light.

At night, they would go back to the hotel where they were all staying, have a cocktail, dinner and sit in each other's rooms and go over the next day's pages.

Although the school shooting is the reason this conversation is happening, it's not really what the film is about.

It's about what happens to the people who have to keep going. How do they keep going? And do they forgive? How do you get out of bed in the morning? And how do we come to terms with ourselves, with our culpability or our ignorance?

She thinks it's a movie for our divided moment too.

It comes at a very good time in our culture, she said. Maybe this film is a way of approaching this problem. Maybe the way we think about forgiveness is impossible because we think it's a finite thing that we decide and then it's done. But it's not like that. It's a beginning, it's not an end.

The four actors emerged from the experience as close friends too, but it was a jarring exit from the bubble of the Mass set.