Even as Muslim riots accused allege discrimination in jail, Tihar authorities insist all inmates are treated equally by staff 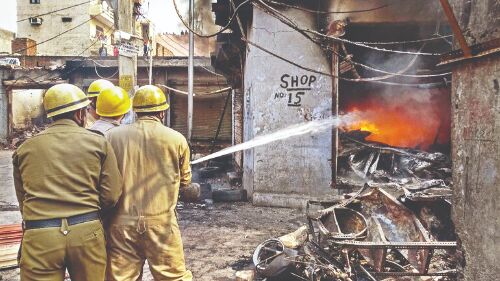 New Delhi: What happens when the Delhi Police, in a rush to show its fair and impartial investigative prowess, arrests some 1,800-odd people, hundreds of them based on demonstrably sketchy police complaints, witnesses, "technical" evidence and questionable and inadmissible "disclosures", in over 750 cases registered to probe one of the deadliest riots the Capital has seen in decades?

There is collateral damage.

Millennium Post, as part of its series on the one year since the north-east Delhi riots, spoke to eight of the hundreds of people arrested by the Delhi Police in various riots-related cases but later granted bail due to sketchy evidence produced by the prosecution to defend these arrests. Across both communities, these arrests have destroyed lives, homes and livelihoods but when it came to recounting experiences in jail, Muslim accused had harrowing tales to tell of the discrimination, abuse and assault they had to face.

However, when asked about these allegations of abuse and assault by prison officials in Delhi, Director-General of Tihar Prisons, Sandeep Goel insisted, "All inmates are treated equally. Basic amenities as per rules are provided to all without any distinction. Medical facilities in Delhi Prisons are good. Prompt medical assistance is provided to all whenever needed. Any allegations of staff indiscipline are taken very seriously and prompt action is taken."

He did not respond to questions about how many complaints of discrimination against Muslim inmates the prisons authority had received in the last year.

33-year-old Zakir (name changed), who was "picked up" by the police in early April from his Mustafabad neighbourhood, and granted bail in August last year said that no matter what he told the police to explain his innocence at the police station, they kept verbally abusing him. "I told them that I was doing nothing at the time of the incident and was not even holding any object... but they didn't budge and abused me further," Zakir said. He added that at the police station, he and other co-accused persons were made to sign a number of papers "out of fear".

Deepak (22), a resident of Shastri Park in Khajuri Khas said he was arrested during the riots on February 25 itself when he was out to get medicines for his mother. A day before, he had managed to rescue a Maulana of the neighbourhood mosque who was severely injured.

"I was accused of being involved in rioting... the officers at the police station were about to leave me when they got a call from someone saying a man named Deepak has been accused in a case of murder so it must be me and I should be arrested," he said. Deepak was in jail till October last year and was released after a court granted him bail, observing that prima facie evidence presented by police against the accused is insufficient and hence he deserved bail.

Similarly, Dilshad (35), a resident of Subhash Mohalla, was also arrested by the police right after the riots, on February 28, for the murder of one Maruf, and was eventually granted interim bail on medical grounds. But he insisted that there was no way he could have been involved and that he was home during the riots.

"I don't have anything to do with the incident... I knew the victim very well... he was an electrician... why would I kill him?... I was at my house and have not been seen anywhere with any stick or any object causing violence," he said.

"My family has faced a lot of problems and tons of money has been spent... it feels like it's a crime being a Muslim," a teary-eyed Dilshad said.

Mohit Sharma (name changed), who spent his 18th birthday in jail, said the only way he could cope with imprisonment was to think it was like living in a hostel. The Sonia Vihar resident was arrested based on CCTV footage and when he tried to reason with policemen that the video did not show him indulging in violence or holding a weapon, "they refuted all claims and said that if I was in the mob, I must have indulged in violence".

"Even my family told me to keep to myself and try to avoid any fights with fellow inmates," he said.

While granting him bail, the court pointed that only one constable had identified Sharma through CCTV footage, but did so after a vast time gap.

Anxiously sitting outside a Karkardooma courtroom, 32-year-old Imran Malik waited for the framing of charges against him in a case of an alleged attempt to murder one Rahul at Maujpur chowk. Arrested on April 7 for a crime that allegedly occurred on February 25, Imran spent over 150 days in jail before being released on bail.

Incidentally, a local court, in a scathing order on March 3, had dropped the attempt to murder charge and pulled up the Delhi Police for trying to concoct evidence out of mere suspicions.

Significantly, the police are yet to trace Rahul, the complainant in the case.

While in jail, Imran lost his job at a jeans shop in Gandhi Nagar and now works as a painter, earning much less. "Which employer would want to take in a person with a tainted record?" he asked.

For Nasir Ali (name changed), who was away from his wife and two daughters for almost two months, overcoming the emotional pain of separation was particularly difficult. "I used to cry inside my cell all day, remembering the time I spent with them (family)," he said.

Arrested in early March and released on bail in early May, Nasir has been accused of rioting and burning a shop in Nehru Vihar.

"When violence broke out, we had thought that if something happened to the temple, the blame might come onto us, so we stayed put outside the temple premises and secured it," he said.

"They didn't show me any CCTV footage to prove their claims against me and I was made to sign a few documents… I didn't understand what was written on them as I'm an illiterate," he claimed.

In his bail order, the court had noted that Nasir's name surfaced only after a week since the registration of an FIR and that there is neither any previous involvement nor conviction of the accused in any criminal case.

Meanwhile, 40-year-old Manoj Kumar from Yamuna Vihar said that the police insisted on arresting him in a riots-related case, despite futile explanations from him. Kumar was arrested in a rioting case of February 22, in April, and released on bail only in September.

"I was simply standing outside my house as an act of self-defence when people started pelting stones and destroying property. In the melee, I picked up a stick and threw it towards the crowd which later damaged a car parked nearby... I had even paid compensation to the car owner but still they arrested me."

In his bail order, the court had noted that Kumar is not visible in any of the CCTV footage presented by the prosecution, his lawyer Rakshpal Singh said.

A sea of difference

While hundreds of accused who were arrested based on now established sketchy evidence, have had their lives upended, Millennium Post's conversations with some of them revealed that Muslim accused were particularly prone to facing communal slurs, verbal abuses and physical assault at the hands of prison officials while in jail.

54-year-old Atif Ali (name changed), who had been picked up from his house in Shiv Vihar in April for allegedly being involved in a case of vandalism of a house and eventually came out of jail around mid-May, alleged that during his time in Mandoli jail, he including other inmates were frequently thrashed by the staff "simply because of the case and our religion". He said, "They used to make communal slurs and call us names like mulla inside jail... this was because of us being involved in a riots

Zakir claimed that while he himself wasn't subject to any physical assault from his time inside the Mandoli jail, there were other prisoners who were beaten up and he "saw constant fear in their eyes". "I didn't have any difficulty in terms of conditions inside the jail but we heard instances of fellow prisoners being thrashed on a regular basis," he said.

While many other Muslim accused, arrested in riots-related cases have made similar allegations against jail officials in the city, Mohit Sharma, Manoj Kumar and Deepak independently told this newspaper that they faced no instance of discrimination in jail but had found the time had brought various other challenges.

Sharma said, "I didn't experience any harassment, though I was initially terrified as to how I'll be treated inside especially since I'm a riot accused…" And Deepak spoke of having to deal with loneliness and a spate of suicides in jail.