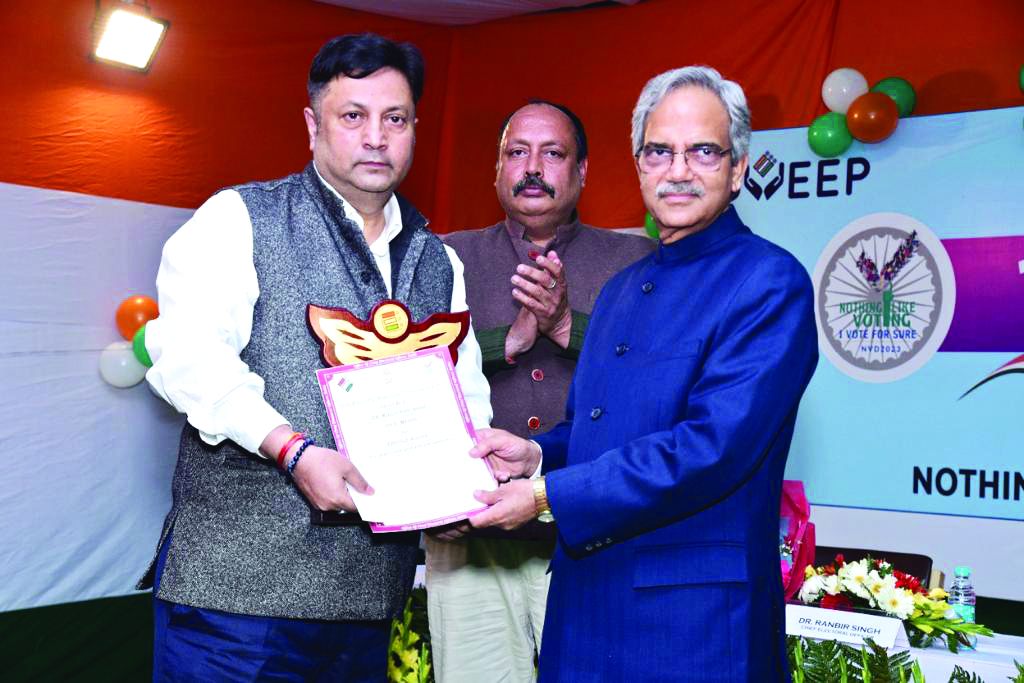 India celebrated its 13th National Voters Day today with the Office of the Chief Electoral Officer of Delhi scheduling a number of activities to mark the occasion with the solemnity and earnestness befitting the occasion. In this regard, Dr. Ranbir Singh stated that the main purpose of the National Voters' Day celebration is to encourage, facilitate, and maximise voter registration and participation, particularly among first-time voters. This year's NVD theme, ‘Nothing like voting, I vote for sure’ captures the essence of successful elections in a truly vibrant democracy.

Since 2011, the 25th of January has been commemorated as National Voters' Day across the country to celebrate the foundation day of the Election Commission of India. The day is devoted to the country's voters and is intended to improve voter awareness and encourage their informed involvement in the electoral process.

The programme commenced with welcoming dignitaries, representatives of various political parties of the state and the state icons, following the lighting of the auspicious lamp by CEO Delhi. The programme involved transmission of the audio-visual message of the Hon’ble Chief Election Commissioner, Election Commission of India addressed to the nation on the occasion of the National Voters’ Day. It was followed with taking of the NVD Pledge:

"We, the citizens of India, having abiding faith in democracy, hereby pledge to uphold the democratic traditions of our country and the dignity of free, fair and peaceful elections, and to vote in every election fearlessly and without being influenced by considerations of religion, race, caste, community, language or any inducement"

Awards for the Best Electoral Practices were given to 42 achievers at the state and district levels for their outstanding performance in election management in the categories Best DEOs, Best EROs/AEROs, Best BLO and Special Category Award. Ms. R. Menaka, DM, North, Ms. Isha Khosla, DM, South-East and Dr. Monica Priyadarshini, DM, South were awarded for Best DEOs. The ceremony continued with the felicitation of a Special Category Award. This award was presented to Sh. Rajesh Kumar (Special CEO, Office of CEO, Delhi) and Classical Dancer, Smt. Alaknanda Dasgupta (State Icon, Office of CEO Delhi) for their constant efforts to encourage and motivate the voters. Sh. Kaanchan Azad, (Officer on Special Duty and Spokesperson, Media) was also felicitated with the Special Category Award for his utmost ‘Dedicated & Sincere Service’. Following this, Sh. Subodh Rawat, (ACEO, SVEEP) and Sh. KR Chhibber (Dy. Director, (Plg.) O/O, CEO- Delhi) were also granted with the Special Category Award for their service. All the awardees have given Cash Prize, Trophy and Certificate.

Certificates of Achievement and Cash prizes for the competitions held in various categories like Tutorial Video making, Slogan Writing in Hindi and English and Poem competition were given.The winners from National Voter Awareness Contest 2022 organised by the Election Commission of India were also felicitated in this event. The winners of the same consisted of Ms.Fiza as the 1st Runner Up, followed by Ms.Harshita Joshi and Mr.Rohit Singh.

In the NVD function, several first time voters of Delhi of diverse categories were felicitated and given their Elector Photo Identity Card (EPIC).

Speaking on the occasion Dr Ranbir said that the twin issues of youth and urban apathy need to be addressed. All stakeholders should work together in this mission. He directed the district election officers to utilise the ELCs at schools and colleges and voter awareness forums at work places to address youth and urban apathy.

Interacting with the media, Dr. Ranbir Singh said, “Voters are the backbone of a democracy. Our constant endeavour is to educate, motivate, facilitate, engage and empower the voters so that they can play their democratic role more and more effectively. Let's renew our commitment for making elections truly inclusive, accessible and ethical on this special occasion of 13th NVD”.