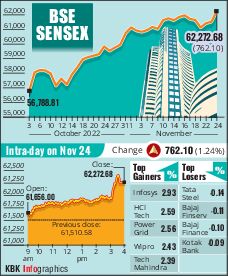 Mumbai: Key stock indices Sensex and Nifty rallied over 1 per cent to close at life-time highs following gains in IT, banking and oil stocks and firm trends in global markets on expectations of slower rate hikes by the US Federal Reserve.

In the three-day rally, Nifty rose by over 2 per cent or 324 points while Sensex advanced 1,167 points or close to 2 per cent.

From the Sensex pack, Infosys was the lead gainer with a 2.93 per cent rise. HCL Technologies jumped 2.59 per cent, Power Grid by 2.56 per cent, Wipro by 2.43 per cent, Tech Mahindra by 2.39 per cent and TCS by 2 per cent. Hindustan Unilever, Reliance, ICICI Bank, HDFC, HDFC Bank and Mahindra & Mahindra were among the major winners.

In the broader market, the BSE midcap gauge rose by 0.52 per cent and smallcap index climbed 0.42 per cent.