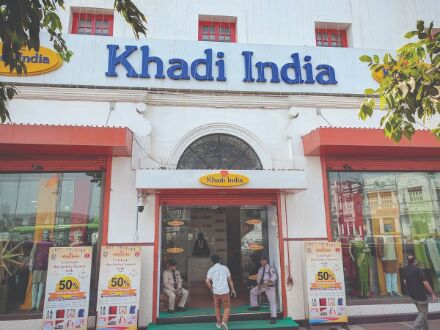 New Delhi: Khadi and Village Industries Commission's (KVIC) aggressive bids to prevent "unauthorized" and "fraudulent" use of brand name "Khadi" has now found legal backing from the courts. Observing that "Khadi" was not a generic name to be used by private individuals or firms, the National Internet Exchange of India Domain Dispute Policy (INDRP) Arbitration Tribunal in Delhi has permanently restrained an individual from using the brand name Khadi. The order came on a complaint filed by KVIC challenging a domain name www.khadi.in being run by a Delhi-based person namely Jitendra Jain.

"It is an undisputed fact that KVIC, the complainant, is the legitimate owner of the trademark "Khadi"/"Khadi India" and has acquired ownership in terms of the provisions of Section 17 of Trade Marks Act 1999…The Tribunal also does not concur with the submission of the respondent that "Khadi" is a generic word and that respondent is entitled to use it. In the opinion of the Tribunal, the impugned domain name (www.khadi.in) is a trademark backed domain name and it not only violates the provisions of the Trade Marks Act 1999 but also violates Clause 4 of the INDPR policy issued by the NIXI," the Tribunal said.

"It is directed that the domain name www.khadi.in be transferred in favor of the complainant (KVIC)…the respondent and any person acting on its behalf are permanently restrained from using the domain name or any other deceptively similar trademark which may amount to infringement of the complainant's registered trademark and also from doing any other thing which is likely to create confusion and deception with the goods/services of KVIC, the complainant," the order dated May 3, 2021 passed by Pankaj Garg, sole Arbitrator read. The Tribunal also instructed National Internet Exchange of India (NIXI) to take incidental or ancillary action involved in the transfer of the domain name, as directed.

KVIC Chairman, Vinai Kumar Saxena said the court order will bolster Khadi's fight against violation of its brand name and help KVIC protect the legitimate rights of the Khadi artisans. "KVIC will not spare any effort to prevent any misuse of the brand name "Khadi" as it has a direct bearing on the livelihood of our artisans who are making genuine handcrafted products in remote parts of India. KVIC will continue to take stern action against individuals or firms misusing the brand name Khadi. This is to safeguard the interest of Khadi artisans and prevent the sale of any spurious product in the name of Khadi," Saxena said.

Earlier in March this year, the Delhi High Court had also restrained a firm from using brand name Khadi and the Charkha symbol to sell its products under the name "IWEARKHADI". The High Court observed that "irreparable loss will be caused" if the firm was not restrained from using the Khadi brand name. "The plaintiff (KVIC) has made out a prima facie case in its favour. The balance of convenience also lies in favour of the plaintiff, i.e. KVIC and irreparable loss will be caused in case an ex-parte injunction is not granted. Accordingly, till the next date of hearing, the defendants, their partners, servants, representatives, agents and all others acting on their behalf are restrained from manufacturing, selling, advertising any kind of goods or service under the trademark IWEARKHADI," the Delhi High court ruled.

It is pertinent to mention that KVIC in the last few years has acted tough against any misuse of its brand name "Khadi India" and infringement into its trademark.