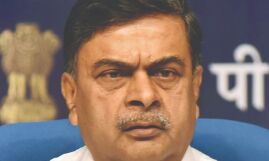 Jammu: Union minister R K Singh on Sunday said India has become power surplus under the leadership of Prime Minister Narendra Modi over the past six years and is also witnessing the highest growth rate in renewable energy in the world.

"There is no power deficiency in the country. We have a maximum demand of 1.85 lakh MW of electricity but the present availability is 3.74 lakh MW," Singh said at a function here.

The Union minister of state for power was speaking after signing of memorandum of understanding (MoU) between J&K government and NHPC for implementation of Rs 34,000 core 850 MW Ratle HEP and 930 MW Kirthai-II HEP and execution of Sawalkot HEP (1856MW), Uri-I (Stage-II-240 MW) and Dulhasti (Stage-II-258 MW) power projects here.

"Earlier, our country was deficient in power but after the Modi government took over in 2014, we have doubled the power generation to make the country a surplus in power generation," he said.

He said there is more investment from the private sector rather than the public sector in the generation of electricity.

"We are doing it in a transparent manner as a result of which India's renewable energy growth rate is the highest in the world and has become an attractive world destination in renewable energy," he said referring to a report.

Likewise, he said the rural areas used to get electricity for 18.5 hours but after the reforms and schemes introduced by the government, the consumers there are now getting 20 hours power supply in 24 hours.

"The urban areas are also getting 20 hours power supply, while 80 per cent of the towns are getting round-the-clock power supply," he said.

He said a new system of smart prepaid meters was introduced to replace the manual preparation and delivery of electricity bills.

"It is good for the public, including the public. You have to recharge your meters through mobile to get electricity and if you are not paying, you will face load-shedding," he said.