"Dialogue of the Deaf: The Government and the RBI" | Government-RBI tango that set the stage for note ban

The RBI not having a role in conceiving it, demonetisation ends up as a political move that touched the purificatory, cleansing chord in the Indian psyche 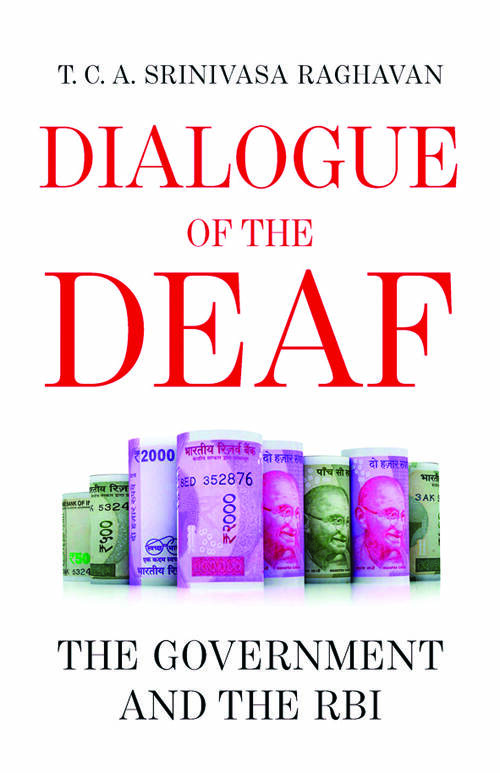 This is the best short history to have appeared of the Reserve Bank of India (RBI), its release being most aptly timed post-demonetisation, to coincide with the commemoration of the apex bank’s founding on All Fools’ Day of 1935.

Demonetisation figures only in the cover image of new Rs 500 and Rs 2000 notes, for the book’s cut-off date is 2008, after which, the author says, the “institution has been diminished in too many ways... not least because the government has wrested back the autonomy the RBI had begun to enjoy after 1992”.

Given that the central bank had no role in conceiving demonetisation, its absence in the text doesn’t detract from the brilliant exposition of government-RBI relations.

Indeed, it is the first unofficial, but authoritative, history of the RBI, laying bare for the lay reader the relationship between the RBI and government.

Without actually posing it, the book prompts the question why Raghuram Rajan, who was the first Governor appointed from outside the government system, also became the first, since Independence, not to have his tenure extended. Was it because he wouldn’t have readily agreed on the virtues of demonetisation, which helped Prime Minister Narendra Modi reap an electoral harvest last month in Uttar Pradesh?

With the RBI not having a role in conceiving it, demonetisation ends up as a political move that touched the purificatory, cleansing chord in the Indian psyche, and which sentiment a campaign like Modi’s Clean India seeks to energise in a collective effort. The stated objectives of demonetisation were to eliminate corruption, black money, counterfeit currency and terror financing.

Both the authority and high readability of the book spring from its original premise, dating from when economic journalist Raghavan was first contracted to help with writing the third and fourth volumes of RBI’s official history, which together weigh several kilos. After being involved between 2003-2011, he resigned from the job when told the writing had to be “dull and boring”, and then independently pursued the idea of an abridged version of the bank’s history.

“Dialogue...” is a must-read for those interested in Indian political economy, and particularly its monetary history, policy and politics. Citing Voltaire, who said god would have to be invented if he didn’t exist, Raghavan writes that “like god, central banks also move in mysterious ways: it is hard to tell how much of what they do has economic substance and how much is purely political”.

The Bank of England and the Banque de France, for instance, were created to fund wars, while the RBI was born out of the need to facilitate the drain of wealth from India to Britain via banks.

Pre-Independence, the RBI’s mandate was to maintain the external and internal value of the rupee through the available instruments of the bank rate, reserve requirements and open market operations involving government bonds. Britain financed the Second World War by government borrowing from the RBI at the rate of three per cent.

The issue of government control over the currency issuer was rooted in the birth of the RBI as an agency owned by private shareholders, which, thereafter, financed the war. In 1949, the new Indian government nationalised the RBI “over its vehement protests”.

The logic of post-Independence political economy inexorably pushed the RBI further into a subordinate position vis-a-vis the government, which adopted the economic unorthodoxy of deficit financing. The government borrowed, while the RBI printed money. Ad hoc Treasury Bills became an attractive mode of financing government expenditure from the 1950s, till the practice was finally discontinued in 1998 by Governor C. Rangarajan.

Rural credit became both a political and economic imperative post-Independence, and ultimately led to the nationalisation of banks in 1969. In the decade that followed, there was a manifold increase in loans to the agriculture sector. This problem has snowballed, adding to the gigantic non-performing assets (NPAs) of banks, even as, earlier this month, the new Uttar Pradesh government announced farm loan waivers worth Rs 36,000 crore, provoking criticism from Governor Urjit Patel.

The 1969 bank nationalisation, and the resulting domination of the Finance Ministry, emasculated the RBI even more. It became part and parcel of the state apparatus for managing the supply of credit and its price in a way that put the public sector at the centre of its efforts, leaving the private sector on the fringes. The apex bank introduced such a complex system of credit controls that, as a result, by 1988 the Indian economy had as many as 235 different interest rates!

Y.V. Reddy, Governor during 2003-2008, and acknowledged as one of its finest, who famously said the RBI is “totally free, within the limits set by the government”, recently said there is no “political economy consensus” on tackling the mounting problem of bad loans of banks, which cannot be resolved by their simple recapitalisation. The NPAs of state-run banks at the end of last September rose to Rs 6.3 lakh crore (almost $98 billion), as compared to Rs 5.5 lakh crore at the end of June 2016.

There was a fundamental change in the relationship post the 1991 balance of payments crisis and the onset of liberalisation. The RBI didn’t become independent in that political considerations ceased to be its concern, “but it did become the primus inter pares among regulators of whom many were to follow to supervise the many new markets” beginning to take root in India.

More recently, 2016 turned out as the most momentous year for the RBI after inception, because by a change in law, a six-member Monetary Policy Committee, which includes three government nominees, started setting interest rates, thus ending the practice of the governor alone being responsible for monetary policy.