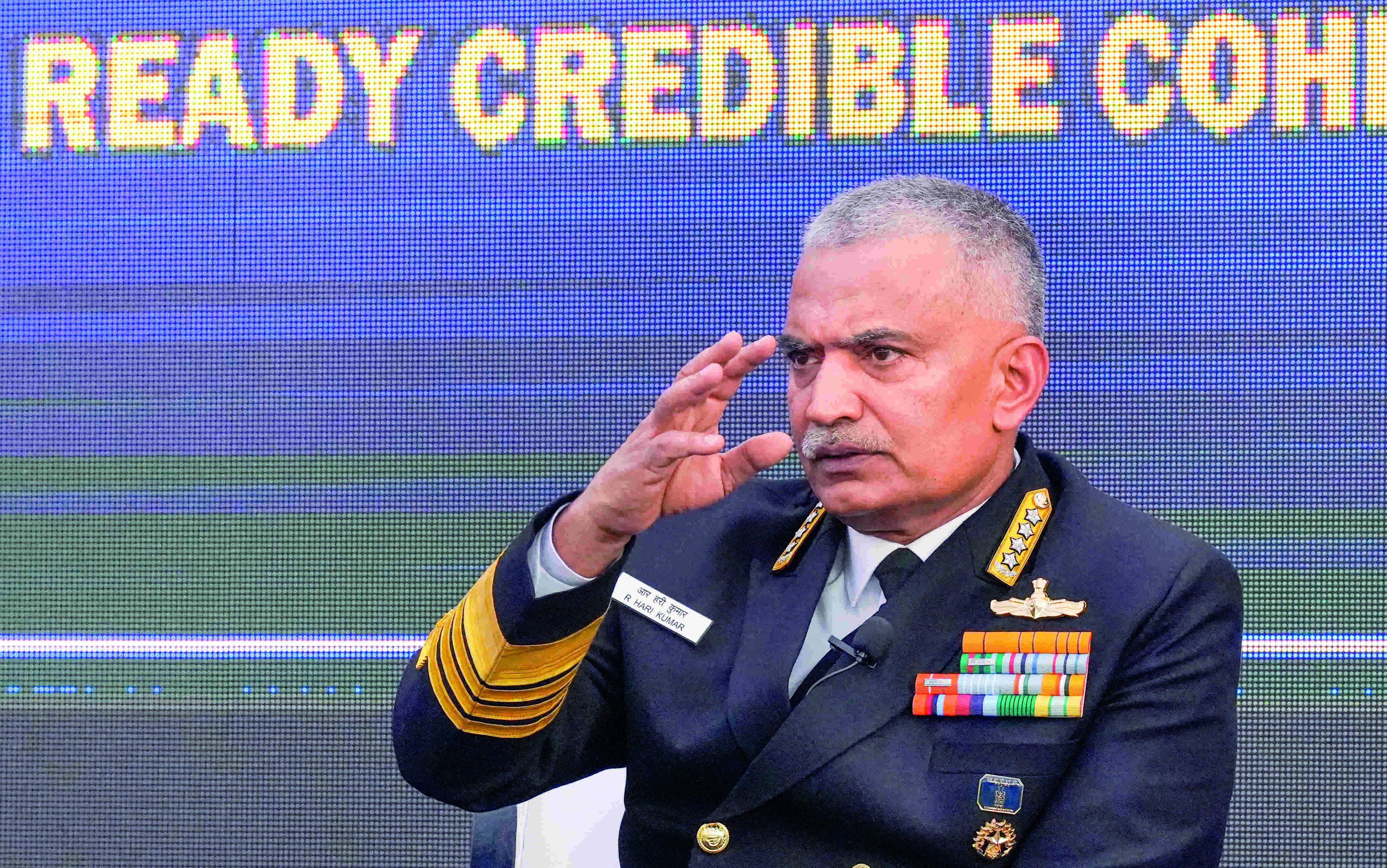 New Delhi: The Indian Navy is contemplating whether to go for indigenous aircraft carrier (IAC) II or prefer a repeat order for the IAC I, Chief of Naval Staff Admiral R Hari Kumar said on Saturday while setting a timeline of 2047 for making his force 'Atmanirbhar' (self-reliant).

Addressing a press conference ahead of Navy Day, Admiral Kumar said the proposed procurement of a fleet of Predator drones from the US is under process and that the Navy is on course for a major capability enhancement to deal with myriad security challenges.

The Chief of Naval Staff also said an exercise is underway in the force to shed the colonial past as "we strongly support the view that we have to get away from this "Ghulami ki mansikta" (slave mentality).

On modernisation of the Navy, he said assurances have been given to the government that the force will become 'Atmanirbhar' (self-reliant) by 2047 and several measures are being initiated to meet the target.

He also said the Navy keeps a strong vigil over movements of various Chinese military and research vessels in the Indian Ocean Region.

"We are still working on what size it should be and what its capabilities should be. Right now, we have put a hold on it because we have just commissioned INS Vikrant. We are quite happy with the way the ship performed in the trial," Admiral Kumar said when asked about the IAC II.

The Navy has been making a strong push for having the IAC-II having a displacement of 65,000 tonnes.

India's first indigenously-built aircraft carrier INS Vikrant (IAC I) was commissioned in September. The aircraft carrier, with a displacement of 40,000 tonnes, was built at a cost of around Rs 23,000 crore.

The Chief of Naval Staff also added that the Navy is examining whether it should look at the repeat order of the IAC I instead of going for the IAC II.

"It (IAC I) was 'Atmanirbharta' (self-reliant) in full bloom. So, we are also currently examining whether we should look at the repeat order of the IAC I instead of going for the IAC II to capitalise on the equities which are available to the country," he said.

"It is right now at the discussion stage. We have not yet firmed up our mind nor have we taken it up to the government," Admiral Kumar said.

People familiar with the issue said the cost of building the IAC II was a major discussion point as there has been a view in the defence establishment that the Navy should focus on enhancing its fleet of submarines rather than spending close to Rs 50,000 crore on the aircraft carrier.

The Navy has been pitching for three aircraft carriers to deal with China's growing naval prowess and its growing influence over the Indian Ocean region.

"This is helping us in developing the next generation fighters to be operated from the deck which is something called the twin engine deck-based fighters," he said.

"We are preparing the draft cabinet note for that. We are confident that by 2026, we should have the prototype," he said.

The Navy Chief said production of the aircraft would start by 2032. He also said that his force achieved a very high operational tempo in the last one year and that there has been greater emphasis on the criticality of maritime security as India marches ahead.

"The government has given us clear guidelines on Atmanirbhar Bharat. We have given assurances that the Indian Navy will become Atmanirbhar (self-reliant) by 2047," the Navy Chief said.

He said that operationally, the Navy had a very intense and engaging time in the last one year.

He also said that commissioning of aircraft carrier INS Vikrant was a landmark event for India.

The Navy Chief said his force's aim is to have Made-in-India security solutions for the country.

Admiral Kumar said around 3,000 Agniveers have arrived in the Navy out of which 341 are women. For the first time, we are inducting women sailors, he said.

Asked about the procurement of the Predator drones, he said the case for it is under process.

The original proposal was to procure 30 MQ-9B Predator armed drones at a cost of over $3 billion to crank up India's surveillance apparatus along the frontier with China as well as in the Indian Ocean region.

"The case for the procurement is under process. We are discussing whether the numbers have to be rationalised," he said.

The MQ-9B drone is a variant of the MQ-9 "Reaper" which was used to launch a modified version of the Hellfire missile that eliminated al-Qaeda leader Ayman al-Zawahiri in the heart of Kabul last month.

In 2020, the Indian Navy had taken on lease two MQ-9B Sea Guardian drones from General Atomics for a period of one year for surveillance in the Indian Ocean. The lease period has been extended subsequently.

"We have gained good experiences while operating the leased drones," Admiral Kumar said.