Duare Ration began for the benefit of people & will continue to run: CM 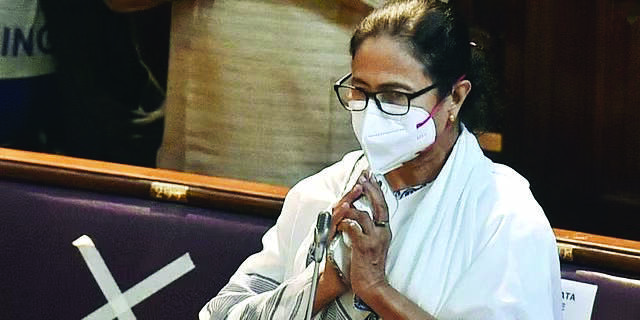 Kolkata: Chief Minister Mamata Banerjee on Thursday said she will overcome all obstacles to ensure that the Duare Ration (Ration at Doorstep) programme initiated by the state government in November 2021 continues.

"The Duare Ration project was started for the benefit of the people and it will continue to run. The state government will not bow its head to any sort of muscle power to stop the programme," Banerjee said during the question-answer session at the state Assembly.

Though the Chief Minister did not name any particular individual or organisation, officials in the state Food and Supplies department said Banerjee's outburst was against a section of ration dealers who have taken legal recourse to stop the programme.

She added that if required, an appeal will be made to the court through the Assembly as the benefit and welfare of the people is the state government's top priority.

The Chief Minister maintained that the state government is offering an incentive of Rs 480 crore to the ration dealers for implementation of the programme.

"It is not that everybody (ration dealers) has opposed this. I have personally held meetings with them too. But in society even when 99 per cent of people are good, there is still 1 per cent who have cravings for enjoying all the benefits," she remarked.

The Calcutta High Court on September 28 had declared the 'Duare Ration Scheme' as ultra vires to the National Food Security Act, 2013 and "is, therefore, a nullity in the eye of the law".

The state government has moved the Supreme Court challenging the order of the High Court.

"The MR dealer association under which a majority of the 20876 ration shops in the state function have also moved the Supreme Court in our support. It is only a handful of ration dealers who are opposing this," state Food and Supplies minister Rathin Ghosh maintained.

The state government is offering a fixed commission of Rs 5,000 per month to the ration dealers across the state acknowledging the latter's support for the successful implementation of the Duare Ration initiative in addition to the existing Rs 75 per quintal subsidy on foodgrains.

"We are also providing 0.02 per cent handling cost on the total transaction volume made by the ration dealers considering the fact that while delivering ration at doorstep, some amount of foodgrains is always wasted. So, we are compensating them for the same by providing the handling charge," Ghosh added.

The Duare Ration scheme, a brainchild of Chief Minister Mamata Banerjee started on November 16, 2021, through which the state government is reaching out to the doorsteps of at least 9.25 crore beneficiaries.

The Chief Minister also expressed her anguish that a few people are moving courts and creating hindrances whenever the state government tries to fill up vacancies.

Banerjee, answering a question on the new appointment of ration dealers during the question-hour session in the Assembly, said: "The state is eyeing to complete the recruitment process within three months but all the state's money is being spent fighting court cases." She also expressed disgust over the situation and requested the judiciary to look into it.